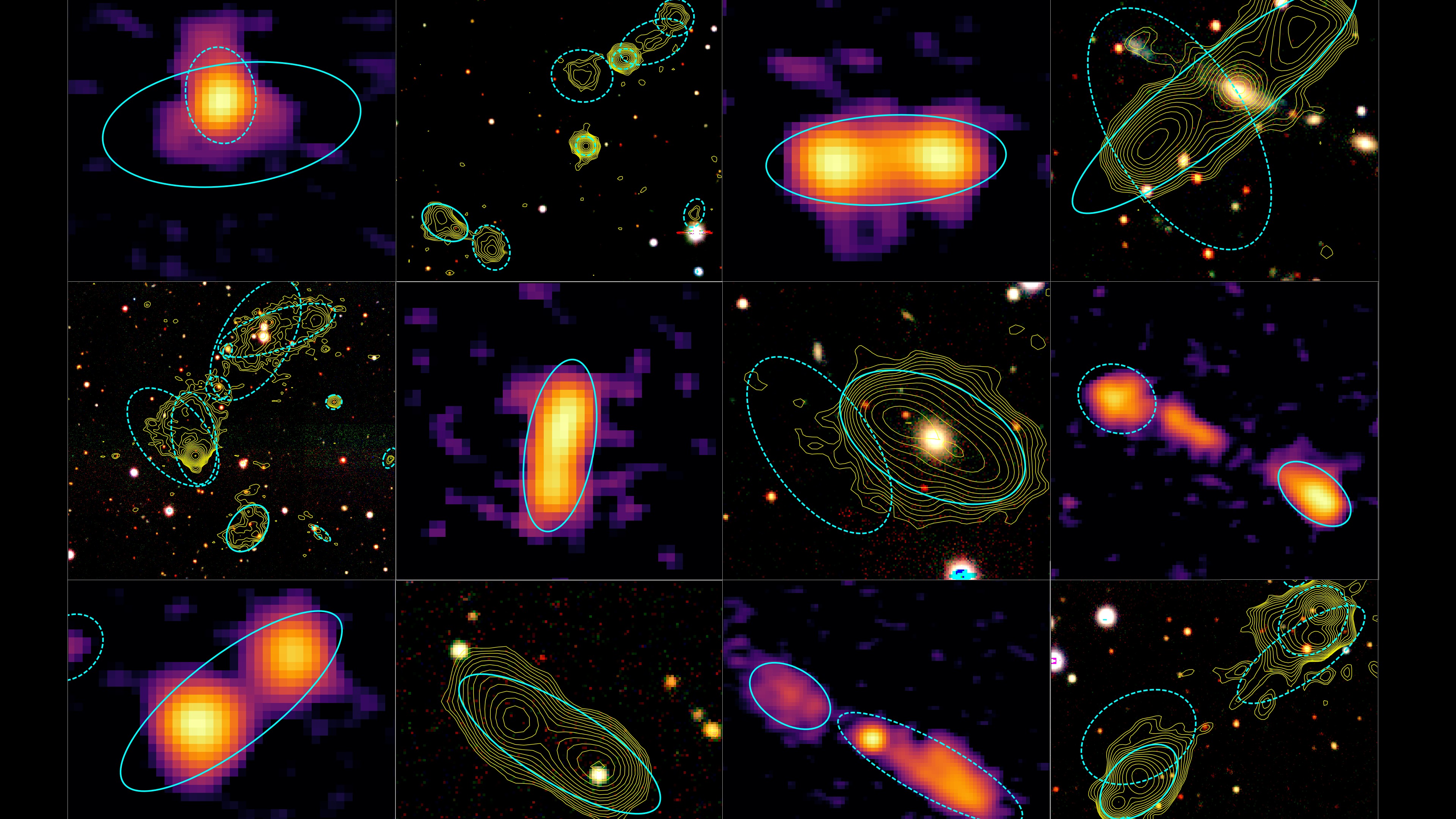 Citizen Science with the LOFAR Surveys

Our main Citizen Science platform is Radio Galaxy Zoo (LOFAR) — we use this to analyse the complex radio images we find and to match them up with optical host galaxies. Below you can find some updates on its progress.

As of today I'm delighted to say that we have completed the main area of the Radio Galaxy Zoo (LOFAR) project. Processing of the output of the Zooniverse project will start next week. In the meantime, we are uploading images from the area of the sky that was already classified by the LoTSS team for our first data release (the 'HETDEX' field). The current radio images for this area are much better than the ones we used in 2018-2019 and in addition it will be valuable to compare the classifications from citizen scientists with those from the LoTSS team. Classifications of these objects will count towards the 2,000 classifications needed to be an author in the forthcoming Radio Galaxy Zoo (LOFAR) journal paper, so please keep going! Further updates will appear here soon.

As we approach the second anniversary of the start of the project I thought it would be useful to add another quick progress update. Right now we have about 37,600 sources that have not been completed — that's around 23% of the total for the survey. Almost every object has been looked at once, but we need a bunch more classifications — around 115,000 in total — in order to get everything up to the retirement level of 5 views per source. It'll be slightly fewer than this in practice because we will retire sources that are unclassified after 3 views, but we still need a fair amount of work to get all the way to the end. I'm optimistic that we can finish this in 2022. Next year will also see the public release of the radio data for the sky area we've been working on, as well as the start of WEAVE-LOFAR spectroscopic observations, which will be using the results of the Radio Galaxy Zoo project. So it'll be very timely to wrap up the citizen science part of the project in the same year (although I expect the platform to continue beyond that in order to generate classifications for new areas of LOFAR sky) and we can certainly do that if we keep up the current rate of classifications. The journal paper that describes the project now has a first (incomplete) draft and has been circulated to collaborators within the LOFAR survey project for comments — I will be contacting potential citizen science collaborators early in the New Year.

Finally, I just wanted to say thank you to those of you who've stuck with the project over the past nearly two years, as well as those who have joined us more recently. We started this project more or less at the same time as the global pandemic got under way and these have been difficult times for everybody. We very much appreciate your contributions to the project. Best wishes for a happy and healthy 2022.

Exciting times for the project are coming up as we enter the final stages of the citizen science effort. Because we are so far ahead with optical identifications for the WEAVE project, we no longer need to do the sky bit by bit. We ahave therefore taken the decision to put all remaining targets on the system, including fainter and more difficult sources identified by other parts of the catalogue processing. As of today, another 25,000 sources have been added, and there will be a further 6,000 or so when we have done some pre-filtering to decide which objects on a second list would benefit from human inspection. Very roughly therefore we will need about another 150,000 classifications to complete the project. At that point, we will have full classification of all the sources that may be required as targets for WEAVE-LOFAR, which is our goal.

Because we are now including some fainter and more difficult objects, we do expect there will be a larger number where there is nothing interesting to say (i.e. no associated dashed ellipses and no optical sources). It's fine in this case just to click through these sources without specifying anything. If three users agree that there is nothing to say about a particular source it will be retired early to save time.

We are in the process of writing a paper that will describe the project and its results and all regular classifiers will be encouraged to contribute to it. I'm expecting to start contacting top contributors in the coming months. If we can push through what's left on the system on the same timescale, then the paper can describe the final outputs from the project, which would be a very nice outcome. So stay with us for the home straight!

It's been over six months since the last update but progress has been good since then. We now have 730,000 classifications and we are continuing to crunch through the area of sky covered by LoTSS DR2, as the usual project image shows: 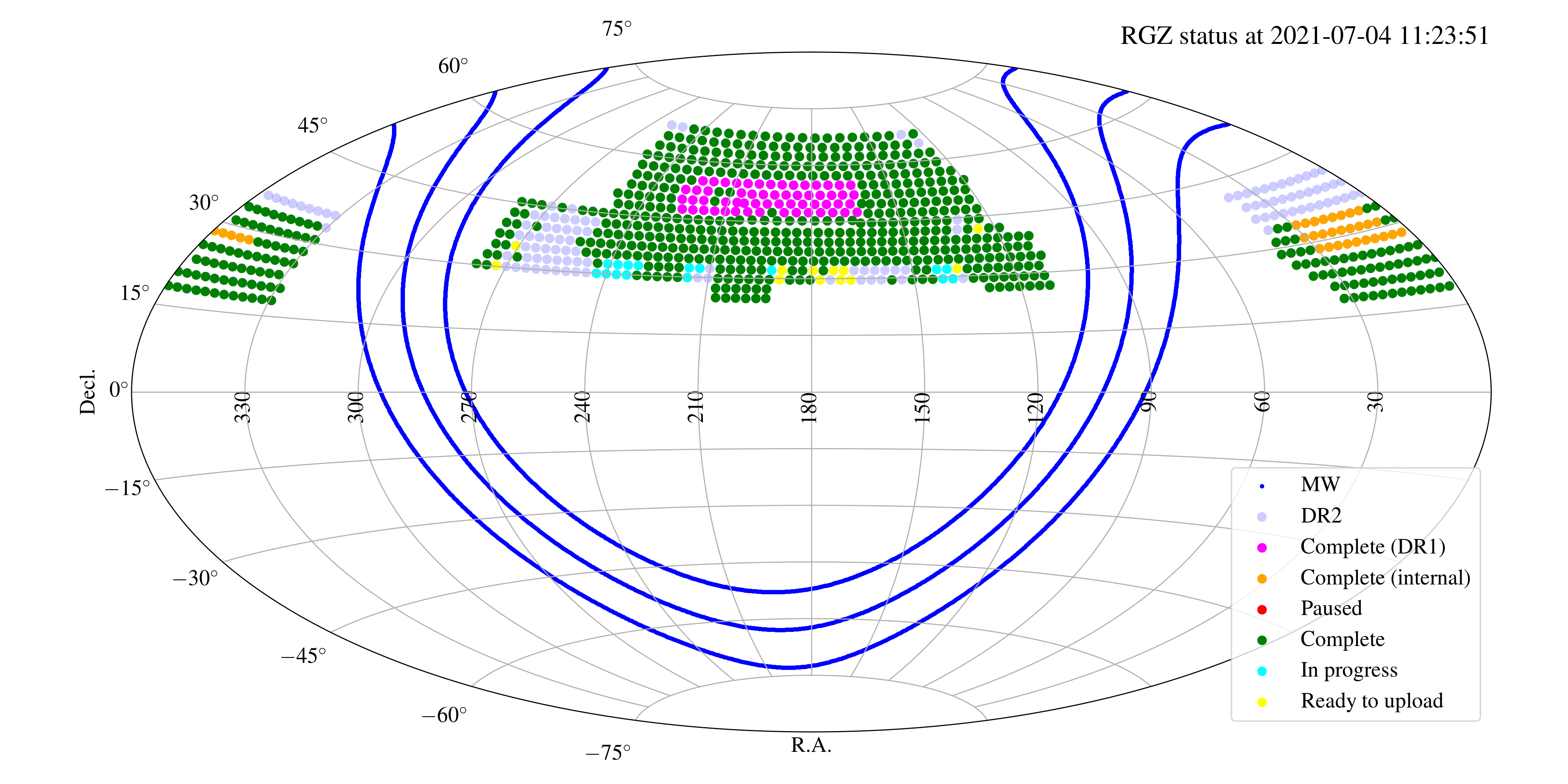 Unfortunately the start of the WEAVE project that I mentioned in my last update has been delayed probably till late 2021 by a combination of the effects of the pandemic and some damage sustained by the instrument while it was being installed. However we're in good shape to provide targets for it when it's ready, since we have completed the whole of the 0h field and several parts of the 13h field.

In the meantime another milestone has been passed as we have released to the LoTSS collaboration this weekend a preliminary catalogue of sources in the parts of the sky that have been completed so far. This will start the process of science exploitation of the work that's been put in by RGZ volunteers, and also help us to carry out quality checks before the data are used for WEAVE observations. Over 60,000 radio galaxies with host galaxies identified by RGZ volunteers or as part of the follow-up process are part of this initial catalogue.

In the coming months we plan to put together a scientific paper that will describe the process we're going through and some preliminary results from the project, and when that's closer to completion I'll be contacting the most prolific classifiers to see if they would like to sign up as authors along with the other members of the team.

Thanks again for taking part in the project, and keep up the good work!

As I write it's Christmas Eve and we're just approaching the 600,000th classification on the project, which has been running for almost exactly ten months. The usual plot of our progress on the sky is below (click to enlarge). 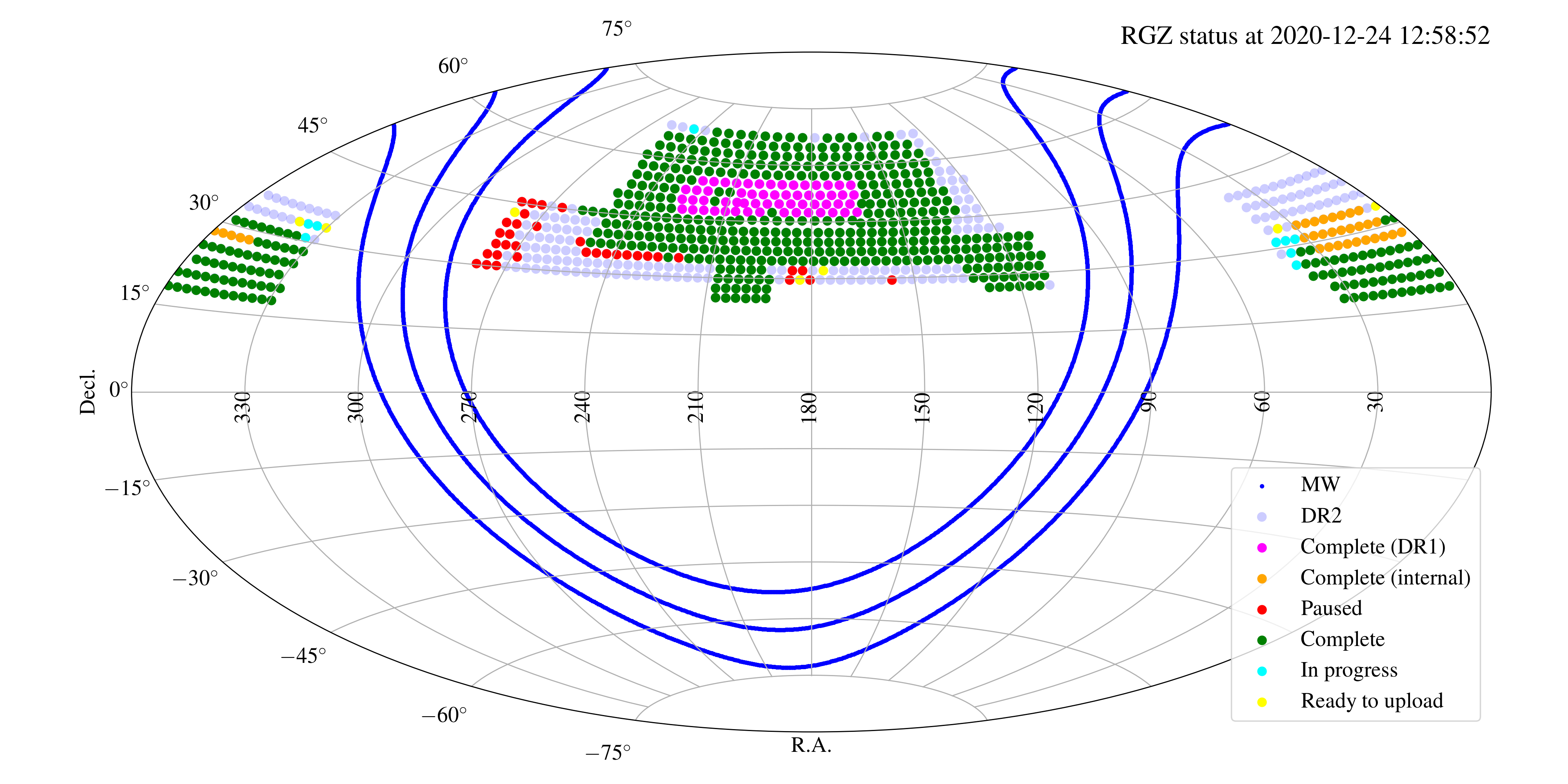 I've been working over the past couple of weeks on the processing of the results for the WEAVE-LOFAR project that I mentioned in my last update. In the image you can see the two fields that we're working on for LoTSS's second data release, DR2, which we call the 13-hour field (the middle of the image) and the 0-hour field (the left and right-hand edges of the image). Specifically we're trying to finish off a stripe around declination 60 to 65 degrees in the north of the 13h field, and all of the 0h field below a declination of about 35 degrees (which is where the Legacy Survey optical data that we're using runs out). We have almost all the Zooniverse views we need for all of this, apart from some small regions on the north edge of the 0h field that are now our top priority and will be appearing for you to classify over the holiday period. For this reason other parts of the sky appear as 'Paused' and we'll get back to them when the 0h field is done.

You might be wondering what happens in between your clicks on the website and the final optical catalogue that we'll be using for science and sending off to WEAVE. It's complicated, and for the details of similar things we've done for other fields you can have a look at some of the papers the team have written (like this one and this one). But basically, the process is this:

It's taken a huge amount of work to get us to this point but citizen scientists' efforts are finally paying off in a tangible way as we ready the first WEAVE-LOFAR target list — and optimistically, looking at the relatively small sky areas left to do, we may hope to see optical identifications in the DR2 data release scheduled for 2021.

If you've read this far, let me finish by thanking you for being involved in the project over the past ten months in what have been difficult times around the world, and by wishing you a very happy festive season and New Year.